​We have been struggling with this concept for a while, being an ISV with many customers who use our products on SharePoint 2007/2010 and are interested in upgrading to SharePoint 2013, but using the deferred site collection upgrade approach. You see, in this approach you upgrade to a SharePoint 2013 farm but still run your 2010 sites in SharePoint 2010 user interface, while allowing site owners to gradually upgrade to 2013 interface gradually.

The challenge this poses for us was simple: which version of our solution should a customer install on such a hybrid farm?

Installing both versions seemed to be the solution, but we had a few issues with that approach:

This approach seems to be working great on our testing, but we still had the 2 issues to deal with (DLLs and solution ID) and I didn't want to burden our R&D with maintaining and producing another package for every product.

So, I am happy to share with you a new codeplex project we've just released for this purpose: "WSP Repackage tool" found here: https://wsprp.codeplex.com/ 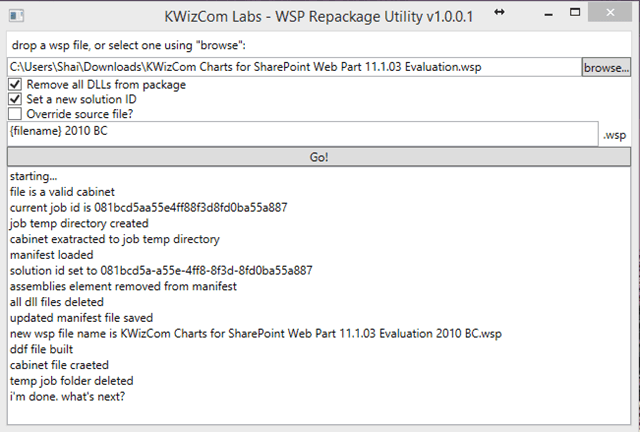 This tool will take your existing 2010 solution package, and repackage it as a new WSP file with a new solution ID and without the assemblies inside. This new package will be the "2010 BC" package that you can safely install on your SharePoint 2013 farm along with the SharePoint 2013 solution to be able to support both 2013 native sites and upgraded sites that still use 2010 user interface.

If you have thoughts, comments please feel free comment on the discussion in the Codeplex project https://wsprp.codeplex.com/.